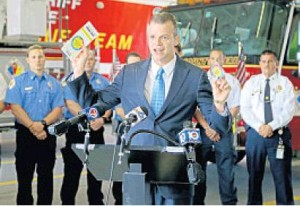 Broward County Mayor Marty Kiar spoke at our Annual Neighborhood Party at the Warsaw Coffee Company and went over the program with us.

The photo and the story below was published in the Sun Sentinel on February 2nd, 2016.

FORT LAUDERDALE — Imagine trying to give medical care to an unconscious passenger or person in shock after a car crash, and not knowing if medications may hurt, rather than help.Broward Sheriff Fire Rescue Firefighter Paramedic Steffen Majer said “too many times to count” he’s wished he had medical histories for people who survive crashes.  Majer and his colleagues answer emergencies from Station 32 in Fort Lauderdale that sits in the shadow of Interstate-595, where he says most of the house’s calls are crashes.

Broward County Mayor Marty Kiar visited the station Monday to introduce Yellow Dot, a free program for motorists who want to let paramedics know medical histories for themselves and their passengers if they are found unconscious or in other dire circumstances.

“I know that this program is going to save lives,” Kiar said.

The Yellow Dot sticker on a rear window tells responders     there should be a pamphlet in a wrecked car that will list a person’s physicians, medical history and allergies, or whether he or she is a heart patient or diabetic.

“A lot of people are so emotionally involved with what just happened, whether it’s shock or nerves, that sometimes even a Social Security number is difficult for them to come up with,” Majer said. “This may also help with people who speak other languages.”

He said it will be important for drivers to keep information in their pamphlets   — that can be picked up from eight county libraries, the Governmental Center; Broward Sheriff Fire Rescue stations and fire houses in 15 cities – up to date.

Kiar attached a Yellow Dot sticker to the back of his family’s white Ford Edge SUV and placed four pamphlets inside, one each for himself, his wife and two young children.

“God forbid we ever get in an accident,” Kiar said. “Our first responders are going to come to our car, they’re going to see that decal and know they have permission to go into my glove box and they can find this medical information to treat me and my family.”

The Yellow Dot program is already being used by other states; Palm Beach County began participating in December.

To print the pamphlet or decal from the county website or for more information, go to www.Broward.org/yellowdot