Little Libraries Popping Up Around Town! 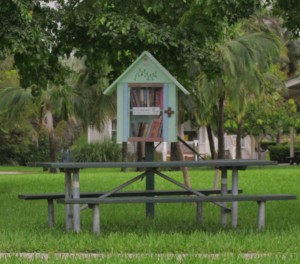 Little Free Library, an international movement aimed at getting people to read more, came to Fort Lauderdale’s Middle River Terrace neighborhood just a few weeks ago. Resident Joann Block answered a call from the city for volunteers to help with a painting project at Warson Park. “I thought I’d be painting bookshelves,” she recalled. Instead, volunteers were asked to put paint on little wooden boxes that looked liked dollhouses or even large bird feeders. Each had a pointed roof, a shelf and a glass door on hinges.”They were to be placed in parks and filled with books and people would be invited to help themselves to a book,” Block said. “Take it home and read it and maybe even bring it back.I’d thought this was just a city program, but I looked it up on the Internet and found they’re doing it all over the place.”

“Fort Lauderdale has actually had one Little Free Library for a year or two, at the Beach Community Center,” said Angela DiPietro, spokeswoman for the city’s Department of Parks and Recreation. The current effort, aided by a child literacy nonprofit in Royal Palm Beach called First Teachers Association, began placing the boxes around town beginning last April. Mills Pond Park got one. So did Osswald, Riverland and Snyder parks.

“They are really aimed at children,” DiPietro said. A bricks-and-mortar library “might be a little intimidating, but now they can enjoy the park, walk up, get a book. Or donate one.” “So far everybody loves them,” she said. “We posted them on our social media account, and we’ve gotten the biggest hits ever.”

Now Middle River Terrace Park on Dixie Highway has a Little Free Library too. That’s why on a recent Sunday afternoon Block was lifting a cardboard box packed with hardbacks onto a two-wheeler and pushing it out to the brand-new library.

“City workers were here and dug the hole and poured the concrete and installed the roofed box on a post about 10 feet from the sidewalk. I’d wanted it near the center of the park, by the benches and in the shade, but they said it had to be close to the sidewalk so passersby could see it,” Block said. “Books are valid,” she said, who retired from the main library on Andrews Avenue 11 years ago. “You can sit down with a book, feel it, turn the pages. It has a much more intimate relationship with you than something on the computer.”

Some people are having book club meetings around these little libraries, Block said, shelving novels by Stephen King and Jodi Picault and how-to’s on cooking and gardening.

Still, it’s aimed at the children, said community association past president Laura Croscenco, who spent her own money on a couple of Dr. Seuss books and a Dickens novel.”Here the children’s parents work,” she said. “They don’t have time to go to the main library.  This is for them.”