Improvements in the works for Dixie Highway

When Colleen Lockwood moved to Fort Lauderdale from Wisconsin in 2007, she was an avid biker. “We rode bikes everywhere . . . there were all sorts of options.” But after one ride in Fort Lauderdale when she first arrived, she says her bicycle wheels haven’t touched South Florida asphalt since. That’s one of the reasons Lockwood, president of the Middle River Terrace Neighborhood Association, said she’s supporting the Dixie Highway Complete Streets Project to improve Dixie Highway in Fort Lauderdale from Northeast 13 Street to the Middle River south of Wilton Manors. “It’s terribly unsafe,” said Lockwood who cited the bicyclist who was killed on Dixie Highway in a hit-and-run incident in February. Fort Lauderdale officials held a groundbreaking for the project on Dec. 3. Construction is expected to begin in early 2017 and, barring any unforeseen delays, is expected to be completed in early 2018. Improvements include dedicated bike lanes, enhanced lighting, new landscaping and shade trees, wider sidewalks, new monument signs, improved drainage, and new raised table intersections and crosswalks. Monique Damiano, public information specialist for Fort Lauderdale, said the raised table intersections will make it easier for drivers to see pedestrians crossing the road. A traffic circle will also be installed at Northeast 16 Court. No changes will be made to the width of the roadway but the speed limit will be reduced from 35 mph to 25. 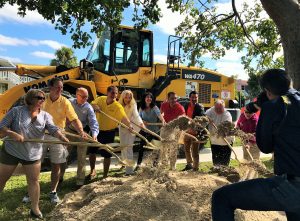 “For this project, it was determined that reducing the speed to 25 mph would be most appropriate given the curve in the roadway, along with the new traffic calming improvements, such as the raised intersections and the traffic circle,” wrote Damiano in an email. The estimated cost is $4.3 million – most of it from the Broward Metropolitan Planning Organization and the U.S. Department of Transportation. In his State of the City Address in October, Mayor Jack Seiler said road safety was very important to city officials.“The City Commission adopted Vision Zero Fort Lauderdale, a citywide community action plan that promotes safety on our streets through the five E’s – education, encouragement, engineering,enforcement, and evaluation, all in an effort to ultimately achieve fatality-free roadways . . . Our efforts in transportation also include establishing an innovative program to develop comprehensive Neighborhood Mobility Master Plans to integrate traffic calming strategies to address speeding and safety issues for all transportation modes.”