The air potato is a seed pod dropped onto the ground off of an invasive species of vine that over time strangles and kills trees due to lack of sunlight. Last year there were hundreds of pounds collected and in a conversation I had with the city forester Gene Dempsey recently he stated that there is still a lot of work to be done. Not only do we collect the seed pods that range in size from a walnut to a tennis ball it’s like a Easter Egg hunt. We also pull what vines we can off of the trees and/or cut the vine at shoulder height to kill it. Points are awarded by weight and the neighborhoods are in competition with one another to collect the most air potatoes. 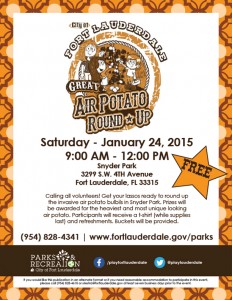