Funding OK’d for railroad ‘quiet zones’ in All Aboard project 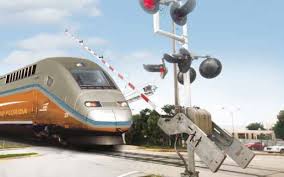 Blaring train horns may become a thing of the past on the tracks that pass through coastal downtowns from Miami to West Palm Beach. Officials announced Tuesday they have secured funding for crossing improvements necessary to establish a continuous quiet zone on the Florida East Coast Railway from Hallandale Beach to downtown West Palm Beach.Quiet zones are areas with enough safety features, such as new lights, gates or raised medians, that the Federal Railroad Administration will allow trains to pass through without sounding their horns. Officials will hold separate news conferences in Boca Raton and Hollywood on Wednesday to talk about the effort.

All Aboard Florida is spending about $800 million to build the first phase of its passenger rail service, with stops in Miami, Fort Lauderdale and West Palm Beach. It plans to run 32 trains daily (16 each way), starting in late 2016. The private company is adding a second track and improving dozens of crossings — 115 in Palm Beach County, 67 in Broward and 19 in Miami-Dade — to safety levels needed for passenger trains. About $60 million will be spent on crossings alone. With construction set to begin soon, officials hope the quiet zone, which still must get federal approval, could be in place before All Aboard Florida’s trains start running.

Planning organizations in Broward and Palm Beach counties set aside $10 million in federal money to help with the effort, but officials now say only about $2 million will be needed. That means the rest of the money can be spent on other priorities, said Greg Stuart, director of Broward’s Metropolitan Planning Organization. The counties are still seeking an additional $20 million in federal funds to fund even more improvements beyond what is required for a quiet zone, such as four-quadrant gates that block the crossing on both sides on all of the major roads and make the rail corridor safer.

Train engineers are required to sound their horns — two long blasts followed by a short and a long blast — about 1,000 feet before reaching each crossing. At 110 decibels, the sound is comparable to a jackhammer, a jet flying over or standing next to a chain saw.