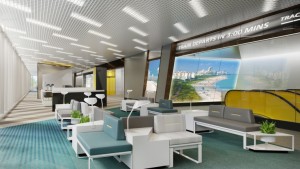 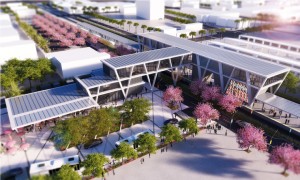 Until now, South Florida’s express train to Orlando has been chugging right along with its plans, but as of Monday, it seems the project is on the fast track to becoming the area’s most attractive method of transportation to Central Florida.

At a press conference Monday, All Aboard Florida unveiled plans for Brightline, the renamed South-to-Central Florida train service launching in its first phase in mid-2017. The train service will take passengers between Miami and Orlando in three hours, with stops at stations in Fort Lauderdale and West Palm Beach.

“With the introduction of Brightline, we set out to reinvent what traveling by train can mean in America, making it a forward-leaning solution that is a smarter alternative to more cars on crowded roads,” Michael Reininger, president of All Aboard Florida, said in a press release.

During the press conference, Reininger explained that mobility in Florida has been a challenge, with residents’ continued reliance on cars creating congested roadways. Each of the Brightline stations will connect with the area’s public transportation options to help passengers get around without cars.

Brightline, of course, is expected to also appeal to Florida tourists, which are expected top 100 million this year.

“We all know, no matter who you are, sooner or later you’re coming to Florida,” Reininger said.

The inter-city express trains will be multi-colored, with train cars painted in five colors—bright red, orange, green, blue and pink—meant to project Florida’s playful atmosphere. They’ll be led by a signature yellow locomotive, a color chosen to keep things feeling fresh, sunny and welcoming, according to architect David Rockwell, whose firm, Rockwell Group, was selected to develop the Brightline brand.

Rockwell explained that the Brightline trains were created with hospitality in mind to establish a new form of train travel. They will feature spacious, leather seating; free WiFi; power outlets; and food and beverage selections, both on-board and at the stations. In fact, travelers on Brightline will be able take advantage of a train cafe car or have staff deliver a cup of coffee or glass of wine to their seats.

Travelers can book either Smart or Select seating. Each of these tiers will offer a quiet car for working or relaxing, and a social car for those traveling with family or friends.

The Fort Lauderdale train station, located at NW 2nd Avenue between Broward Boulevard and NW 4th Street, will include a multi-story lobby and elevated guest lounge. 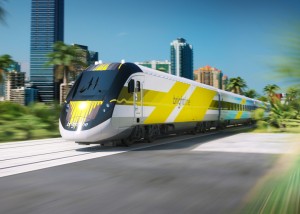